Announcing of the List of Public Libraries, Proposed for Inclusion in the First Phase (2009 Phase) of Glob@l Libraries – Bulgaria Programme

455 public libraries from 234 municipalities in the country were proposed for inclusion in the first phase (2009 Phase) of the Glob@l Libraries - Bulgaria Programme. The Programme aims to stimulate the modernization of libraries throughout the country, thus helping Bulgarian citizens integrate into the global information society. The partner libraries will be provided with Internet access, computers and supporting equipment, and training for library workers who service visitors. Libraries are expected to expand their activities, to become more attractive places for visitors and to play an important local development role.

The process of target libraries selection followed the principle of a balanced geographic spread. Other key criteria were to include the highest possible number of libraries, to balance the goal of reaching a higher number of people while still meeting the needs of smaller settlements, as well as support and financial participation from the local government. 314 of the proposed libraries are located in settlements with population under 5,000.

The assessment for selection of the target libraries was based on the execution of their main duties and on their community work during recent years. The assessment results were reviewed by independent experts, the Program Management Unit, the 28 District Coordinators under the Programme and representatives of the key partners: the Ministry of Culture; the Ministry of Transport, Information Technologies and Communications; the Bulgarian Library and Information Association; the National Association of Municipalities in the Republic of Bulgaria and UNDP.

840 libraries from 245 municipalities applied for inclusion in the 2009 Phase of the program. These applications were jointly submitted with the municipalities, demonstrating the long-term commitment of local governments for this program. The library selection procedure and the requirements for inclusion in the Programme were presented during the months of May and June 2009 to more than 3,500 library and chitalishte workers and representatives of municipalities in all 28 districts of Bulgaria.

The total Glob@l Libraries - Bulgaria Program budget is USD 50 million, which includes the Bill & Melinda Gates Foundation grant of USD 15 million, a USD 6 million software donation from Microsoft Corp., and a matching contribution of USD 29 million from Bulgaria's central and local government budgets. A total of 900 public libraries will be provided with ICT equipment for library users, and 3000 workers in these and 700 other libraries will be included into a comprehensive training program in the period 2010-2012. The training program will involve libraries in advocacy, public relations and fundraising activities, promotion of new services for visitors and networking.

Applications from libraries and municipalities for inclusion in the second phase of the program (2010 Phase) will start in February 2010. 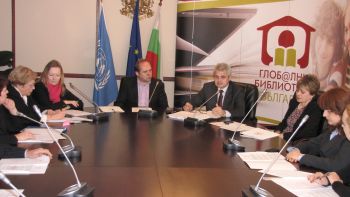