The new Mediatheque created with the support of the Glob@l Libraries - Bulgaria Program opened on 15 December in the Pencho Slaveykov Regional Library in Varna. A new room with 10 computer workstations is designated in the Art department of the Varna library for training librarians from the Varna district and library patrons. Internet access is provided, as well as an opportunity to use CD's and DVD's with movies, music and multimedia educational programs from the library fund. The Mediatheque was officially opened with the latest, eighth course in computer skills for patrons of age 60+ which sparked great interest and was well named by the participants "Third Age Online".

On 17 December 2010 the Pencho Slaveykov Regional Library in Varna announced an Open Doors Day during which the upgraded information centre was opened. The library's information centre was created in 2003 with the aim to increase and enrich the opportunities for providing electronic information services to the citizens and community. Now, with the support of the Glob@l Libraries - Bulgaria Program, the information centre is completely upgraded. The library received 25 new computers, printers, a scanner, a multimedia projector and other peripherals. The workstations in the centre are now 11. The so-called Info Points were also created - they represent another opportunity for using the library databases in the library space. During the opening, everything that the library offers as information resources and services was presented to the guests and patrons of the Varna library. Also, the library's participation in the "Varna Digital Library" was outlined. The project is a part of the large European project Europeana. At this stage, the digitalization of old Varna periodicals is the Bulgarian contribution to Europeana. 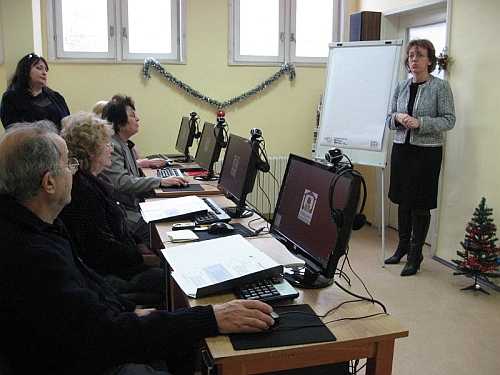