A new computer room equiped under the Glob@l Libraries - Bulgaria Program opened in the municipal library of Svilengrad on 10 January 2011. Available in it are 13 computer workstations, a laptop, a multifunctional device, a multimedia projector and a color printer.

"Providing fast, easy and universally accessible Internet access has made our library global and that makes us very happy", said the director of the cultural institution Pavla Mihaleva during the official ceremony which was held in the early afternoon. She stated that the creation of the centre is a fruit of many people's labor united by the thought of improving life through more knowledge and information.

The municipality mayor Georgi Manolov extended his congratulations to the citizens on the good acquisition. In the presence of government and municipal servants, teachers, students, representatives of cultural and educational organizations and many citizens he announced the forthcoming moving of the library to a new building. In accordance to a decision of the municipal council, it shall be accomodated in the restored building of the ex-district management building situated on the bank of the Maritsa river.

"We aim to turn libraries into a place where everyone can get information", said in her congratulatory speech the director of the "Hristo Smirnenski" Regional Library in Haskovo and program coordinator for the district Tonka Koycheva.

The opening of the information centre was accompanied by a performance of the children's group fpr authentic folklore "Trakiyska Kitka" with "Prosveta" chitalishte, with Violeta Karapeeva as artistic director. Students from the elementary and high schools in the town demonstrated their computer skills using the new computers. 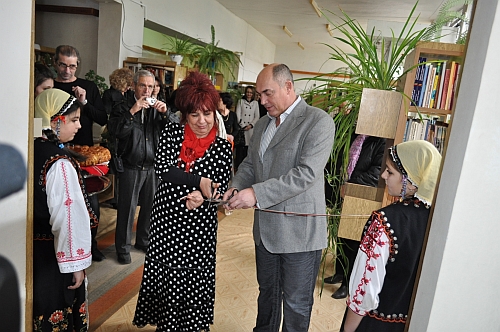