Ihtiman is a town situated in west Bulgaria, 48 km from the capital of Sofia and about 95 km from Plovdiv. According to the latest statistics, the population of Ihtiman is 13,763 people.

As in all smaller Bulgarian towns, the chitalishte in Ihtiman is one of the places where people come together to communicate, have fun and, since recently, access various information services. For this purpose, they rely on the library at Sluntse 1879 Public Chitalishte which has been operating for more than 130 years. 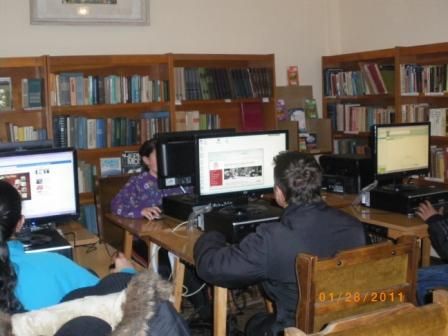 One computer is not enough for everyone and hence the library in Ihtiman applied for participation in the Glob@l Libraries – Bulgaria Program. In January 2011, the library received under the program 7 computers (one laptop and six desktop computers), a multifunctional device, a multimedia projector with a screen and the reading room was transformed into an information center accessible to all citizens of Ihtiman.

Library users of all ages took interest in the new information center but one age group – pensioners – remained isolated since most elderly people in Ihtiman were unable to use computers. To help this group of users, the librarian Emilia Atanasova decided to organize basic computer skills trainings for elderly people. She approached the municipal pensioners’ union and Ihtiman Municipality for assistance and they helped her promote the opportunity for participation in a free-of-charge training among the elderly population of Ihtiman.

The first training took place in February and March 2011. The trainers Daniela Georgieva and Adelina Delsizova were hired through the Employment Office in Ihtiman under the program for temporary job placement of unemployed young people aged up to 29 years. Thus, the library saved money for their fees – they were paid under the temporary employment program and the trainees received individual attention and assistance during the training. 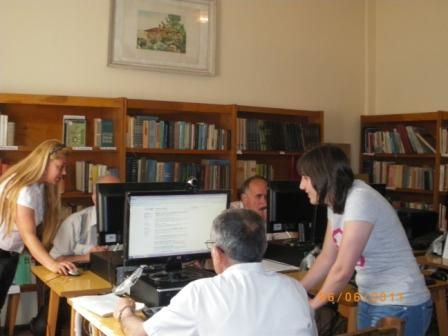 Over the last year, the library in Ihtiman trained 67 people who can now search information online, create folders, work with text-processing software, access e-mail, Skype and Facebook. In addition, trainees who are willing can acquire further skills they need, e.g. create presentations or work with digital images. 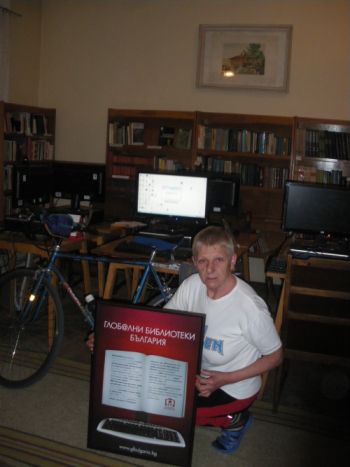 Among the most colorful persons trained in the library is 62-year old Snezhana Stoimenova from Ihtiman who is an active cyclist riding her bicycle around the world. Snezhana has friends and relatives in Bulgaria, Greece and Canada and after participating in the training organized by the library in Ihtiman she will use Skype and Facebook to share her travels online. This is what she said to the program team in response to the conducted training: “I extend my gratitude to you for the opportunity for us, pensioners in Ihtiman, to get a taste of the global information world through the computers that you provided to the library at Sluntse 1879 Chitalishte in Ihtiman. I would like to especially thank Emilia Atanasova, Chief Librarian, for the fact that over the past two months, February and March 2012, she taught me computer literacy two times a week, free of charge, in a very patient and committed manner”. As to her intriguing hobby, Snezhana adds: “My hobby is travelling around the world on a bicycle. Accessing new technology was a problem for me. In every city library around the world you can use the internet for free, but this is impossible when you are illiterate. I am grateful to the Glob@l Libraries – Bulgaria Program for making it possible for me to travel the world safely because now I can use e-mail, Skype, Facebook and contact my friends and relatives all over the world”.

The first training in Ihtiman was launched with elderly participants but young people also took part in the following trainings. In the beginning, training participants included pensioners who retired due to health reasons and subsequently they were joined by other people who needed to improve their computer and internet skills. As a result of the need shared by the young unemployed library users, an additional training is to be held in April. It will focus on CV and motivation letter design.

Emilia Atanasova, Chief Librarian, shares some other benefits of the conducted trainings for the elderly citizens of Ihtiman: “The results we achieved exceeded our expectations not only because our pensioners acquired computer literacy in response to their specific needs, but also because of the fact that the foundations of a partnership were laid. At the initiative of the pensioners’ union and two pensioners’ clubs  in Ihtiman, we agreed that the library will train pensioners in computer and internet skills and pensioners will look for unpublished poems and short literary forms written by local residents. This is how the idea of creating a “Personal Works Written by the People of Ihtiman” archive and presenting it to the public was born. Within the traditional festival “May Days of Arts 2011”, unpublished poems by people who are no longer with us, writing pensioners and high school students from two schools in town were presented. These meetings transformed the library into an access point not only to information, but also to communication among people of different generations, different social status and different ethnic backgrounds. We also stimulated the feeling of self-aid among pensioners by involving them as volunteers bringing books to the homes of other sick and sedentary pensioners so that they could have access to the library services. All this happened thanks to the information center equipped under the Glob@l Libraries – Bulgaria Program. To ensure the sustainability of training results, we conduct consultations on computer literacy related questions every Wednesday. Some pensioners learned to make presentations, for example Ms. Mananska designed one on the occasion of her 70th birthday. Others, like the local poetess Maria Stoyanova Stoykova, brought pictures that we scanned and incorporated into CVs of pictures. Thanks to the Glob@l Libraries – Bulgaria Program, we set off in the right direction to overcome the information and cultural gap among the pensioners in Ihtiman”.